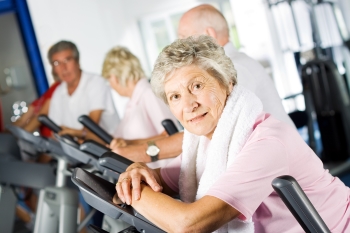 It also appears that regular physical activity benefits the brain. Studies show that people who are physically active are less likely to experience a decline in their mental function, have a lowered risk of developing Alzheimer's disease, and possibly have improved thinking among people with vascular cognitive impairment.

If you know you want to avoid a nursing home, assisted living facility, or any situation where you will need prolonged periods of in-home care, regular exercise before the age of 65 may be the way to protect your independence in old age.

Correlation Between Aerobic Exercise and Alzheimer's

Regular exercise makes bones stronger and less fragile; one of the prime contributors to fragility in elderly patients includes a loss of muscle tone and bone density. You can protect your body from both by incorporating regular exercise into your routine on a semi-daily basis.

A recent study from the University of Texas shows that cardiovascular exercise reduces patients’ risk of dementia as they grow older. Just one hour’s exercise a week can reduce the chance of Alzheimer’s disease by almost half, according to a landmark study which ranks the seven lifestyle threats fuelling rising levels of dementia.

The research by Cambridge University says one in three cases of the condition could be prevented by increased activity levels, a reduction in smoking and tackling health problems such as obesity and diabetes.

This result has been found in other studies, too. The above results were from a study by the Cooper Institute, published in the Annals of Internal Medicine. Another study, this one published in the Archives of Neurology, examined 639 participants aged 90 and older. Their findings pointed toward a strong link between poor physical fitness and cases of dementia in the very elderly.

Poor health in general has also been found to increase your risk of dementia. Studies show that in addition to getting a regular, moderate amount of exercise per week as early as middle age, you should eat healthy, drink moderate amounts of alcohol, and avoid smoking.

Exercise, however, has been shown so far to have the largest effect on the likelihood of developing dementia. But its benefits don’t end there. In addition, exercise often leads to a more robust and independent old age. This is especially important news for those who want to stay in their own homes as they age in place.


The best part is that you don’t have to exhaust yourself to get the benefits of exercise. The study found that those who engaged in just 150 minutes of moderate exercise per week—that’s half an hour, five days a week—can reduce their risk of contracting Alzheimer’s disease and other forms of dementia.

The bottom line is this: one in three adults over the age of 65 will develop some form of dementia in old age. Dementia is a devastating disease that can cause its victims to linger for years, needing vast amounts of attentive care and resources.

Millions of Americans won’t retire with the resources they need to cover the kind of care required by advanced dementia. You don’t need to be a marathon runner to reduce your risk of dementia through exercise—you just need to devote about 30 minutes to it, five days a week. If you do, you boost your chances of being one of the lucky ones who avoids dementia throughout old age.